When I was first learning the ropes about how to be a good journalist, I was admonished by my professor at the University of Florida, Sid Pactor, to never be without two items – a pen and a quarter – perhaps the most important things in the entire equation of me getting a scoop or being scooped by the competition. The pen, of course, was to write down the necessary information – the scene, the location, the important players, the quotes, etc. The quarter was to use for the pay phone to call in the story to the newsroom. (True story: I carried a pen and a quarter for over twenty years, even though I was not a working journalist in the strictest sense.) How things have changed since “C-plus Sid” beat that professional lesson into me!

Today, perhaps the most important thing for a journalist to have at all times is connectivity. To be connected to “the newsroom” to get the story in on time? Sure. But, more than that, to be connected to a handy, lightning fast research lifeline called Google – along with its numerous offshoots, including Maps, Street View, Images, Plus, News Lab, YouTube, and more. Google has had a transformative effect on the process of reporting the news from the beginner citizen journalist to the most seasoned, well known reporter.  I set out to discover just how much impact Google has had on local, working journalists familiar to me, and I posed that question to several, assuming most would sing its praises.

Without question, Google has greatly simplified certain aspects of a reporter’s job. I doubt that a day goes by that I don’t use Google to help with at least some basic research for a story I’m working on. Some days, it seems like I am constantly on Google—using it to look up past news coverage of a certain event, to find new sources of data, to search for the meaning and precise wording of a phrase I want to use in a story, or just to be sure I’ve spelled something correctly. These are pretty basic tasks that, prior to the internet (and search engines) might have taken hours, if not days to accomplish, and have involved much time on the phone and several trips in a car (to the library, the Capitol, etc.). I also use Google Maps on a very regular basis, for a variety of reasons. When there is breaking news and all we have is an address provided by fire or police, I can quickly plug that in and see the bigger picture of where it is and what it’s near. If I’m doing a story on a sexual offender, I can look up the person’s address and, with Google Maps, pretty easily ascertain whether they’re living too close to a school or a park. Using the street view feature, I can actually see what a particular address looks like before I go there—this can be invaluable. So, there are many, many ways that Google and YouTube…have made life easier for journalists. Primarily, it’s the near-instant access to all types of electronic information—this has decreased the turnaround time for stories, especially investigative stories, greatly. – Alex Cameron

Reporters use Google for everything. Any crime scene. You can look up the address and Google Earth it. You can Google any crackpot that calls in with a story idea to authenticate them. – Darren Brown

It’s my primary option when researching anything. Google and YouTube are enormous resources. – Tres Savage

Google search can be great for finding stuff. For day-to-day work, you can find sources – like right now in Oklahoma – my students are working on stories about the state questions. One student was looking for the pro and anti side of one of them.  Google helped locate contact info and a list of people for and against. In the old days we would have had to make a phone call, wait for someone to gather the names, or make multiple phone calls to get that bit of info. – Desiree Hill

Though admitted proponents of using Google, many did also express some wariness of the convenience.

The danger, of course, is that stories don’t get vetted and edited as thoroughly as they once did. So, a journalist still has to apply the same standards and litmus tests to the information that goes into a story.

One must “read” Google results like they read anything else. The credibility of each individual site matters.

Looking at it from the teaching side, it has opened doors to problems for students, because they believe they can “just look something up on Google.” It may not be relevant or accurate. Younger folks are at the risk of being very lazy when it comes to research and digging. For a seasoned journalist, a good tool like Google in good hands can create better content and communication opportunities, and you’d also think that time-saving would make the reporting better too. However, I think instead of better quality or more content, reporters are spending time feeding the beast – social media, the web, etc.  It’s a strange, vicious circle.

Based on feedback from these journalists in my area, Google and its assorted offshoots have become ubiquitous with story research – both light daily and heavy investigative – an indispensable tool without which they feel they would be propelled backward to a time that required more time-consuming “heavy lifting” by reporters. Few professionals are interested in that.

Yet we also understand that Google, et al, create a wider berth for error and misinformation to get through. In taking a brief look at the latter, we can find stunning examples of Google putting forth questionable information: 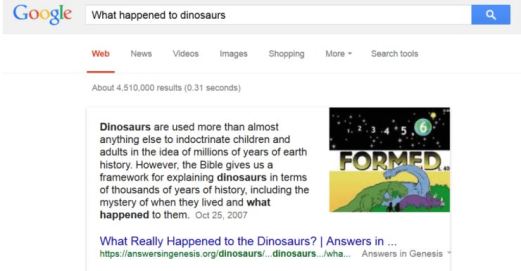 Not that a reputable journalist would incorporate these particularly debatable examples, but what else might be out there on the web with more subtle positions that a reporter might use in error?

While my local reporters did not make much mention of YouTube, the opinions of the international journalistic community certainly give it its due. UK Channel 4’s International Editor Lindsey Hilsum states that YouTube and amateur footage from citizen journalists have helped to create a new form of journalism that has enhanced international reporting and cites the war in Syria as an excellent example.

The situation there is so dangerous that news organizations are not sending reporters to the area. The information getting out is almost exclusively via citizens uploading their videos to YouTube.

“It has been a disastrously dangerous war to report. YouTube has become an incredibly important part of how we report it,” says Hilstrum.  And, as the Oklahoma reporters warned about sourcing from Google, she also acknowledged the uncertain dangers of broadcasting footage from unverified sources. “Sometimes a clip doesn’t tell the whole story,” she said. “People putting footage out often have an agenda.” Her news organization has a staff member dedicated to verifying footage received from external sources.

The Atlantic’s Michael  Shiavenza invoking a YouTube motto “Broadcast Yourself” opines that the video-sharing network has “permanently changed the landscape of journalism. Any individual with a smartphone and Internet connection now possesses a tool once reserved by television networks.”

Google, et al, have not only heavily influence the reporting of news today, but also, of course, the consuming of it. SEO can have a profound effect on what stories we even see. A very newsworthy item may well be buried in search results under more “hot topic” type material.  Google News Lab even offers journalists help with optimization.

Much like the reporters who would never willingly give up their access to Google and YouTube, the company shows no sign of relinquishing its own hold on the first instincts of today’s journalists to turn to the Google family first and often. No one’s going back.

Lees, C. (May 26, 2016) – Reuters Institute for the Study of Journalism. “How Internet Connectivity, YouTube and Amateur Footage is Changing International Journalism.”

Gusenhues, A. (June 17, 2015) – Searchengineland.com. “When Google Gets It Wrong: Direct Answers with Debatable, Incorrect & Weird Content.”

One thought on “Google’s Impact on Journalism: No Going Back”