Minneapolis-based Target Corporation defines itself as “an upscale discount retailer that provides high-quality, on-trend merchandise at attractive prices in clean, spacious and guest-friendly stores.” The company states its purpose to be one of “fulfilling the needs and fueling the potential of its guests,” making Target their preferred shopping destination in all channels by “delivering outstanding value, continuous innovation and exceptional experiences”—consistently fulfilling their Expect More. Pay Less. brand promise.

The company has a reputation for being a leader in retail industry innovation such as being the discount store that started the trend of partnering with respected, higher-end designers. Target attracts a “younger” customer, if you wish to classify your average 40-year-old as “younger,” and it focuses on remaining relevant by reinventing its store layouts, presentation, and the merchandise it sells. It is perceived as a clean, organized, high-end discount store.

Although it is dwarfed in size by its chief competitor Walmart, Target, in the United States at least, is on par with its brand awareness – i.e. – everyone recognizes the red color scheme (exciting, bold, youthful) and the bullseye logo and knows in broad form what those represent. 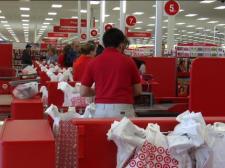 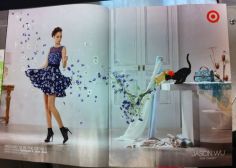 That awareness began, of course, before the dawn of social media. Target has been quite successful at promoting itself over the past couple of decades via traditional media – TV commercials, print ads, direct mail – but it has stepped up its game by truly delving into integrated marketing communication.

By definition, Integrated Marketing Communication (IMC) is “a cross-functional process for creating and nourishing profitable relationships with customers and other stakeholders by strategically controlling or influencing all messages sent to these groups and encouraging data-driven purposeful dialogue with them.”   Target continues to build its already successful brand by engaging with customers and prospects via social channels and managing their day-to-day interactions with them. The company appears to have a very good understanding of the importance of using the multimedia tools at its disposal to communicate with its audience. Target continues to utilize traditional media well while also having a high-profile presence on Twitter, Facebook, Instagram, YouTube, Pinterest, and Google+, and now has embraced Snapchat and Periscope as well.

As mentioned earlier, the company’s brand promise is Expect More. Pay Less. It’s only four words, but it is a broad message that they do a good job of keeping as the underlying message of their imaging across all platforms. I believe, because of the broad simplicity of the message, it allows many opportunities for development of “sub-header” descriptions of the company which they definitely cultivate and fertilize – “fun,” “on-trend,” “fashionable,” “social,” etc. These are evident in the company’s day-to-day marketing.

Let’s look at a recent example. Target planned and promoted a special weekend event called Force Friday coinciding with an upcoming new Star Wars movie. Stores across the country were going to be open at midnight on Thursday Sept. 3 (actually 12:01am Friday Sept.4) and offering a wide selection of new Star Wars-related products – action figures, costumes/clothing, toys, school supplies, and more. They obviously had a well-planned rollout of the fun promotion that spanned many of their social media channels in addition to traditional venues: 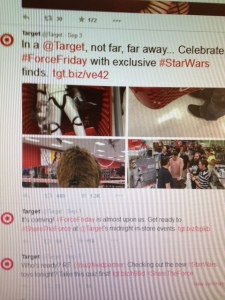 Needless to say, the brick and mortar stores were prepared for the rush of StarWars fans with fun displays and much product, and the website was ready as well.

They even created their own special website for the event – www.sharetheforce.com.

The social media marketing team made an effort to push people to see content on different channels as well: 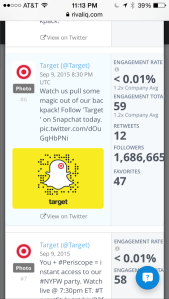 Perhaps most of all, Target did an outstanding job of stoking the conversation by directly responding to and engaging with their audience – commenting on customers’ experiences, sharing followers’ excitement over the promotion (and the movie), sharing customer-created content, and smartly using “conversation extenders” such as Twitter hashtags and invocation of brand partners. 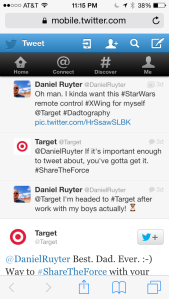 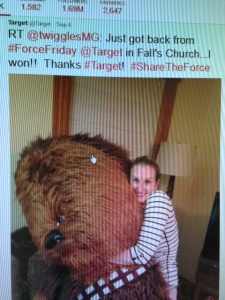 Target achieved “ubiquity” in its integrated marketing efforts for this particular promotion, and the total social engagement efforts propelled Target to great leads over its competitors over the same time period. 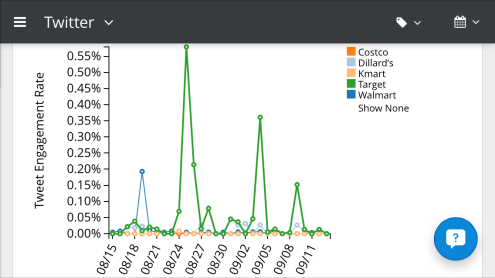 All of this indicates a very engaged business that understands integrated marketing. Where this leads, naturally, is increased customer loyalty and affection. The company feeds that affection and enhances the buying cycle by speaking to its customers and fans in a casual, playful, tongue-in-cheek voice. Its social persona is fun and friendly, like conversing with a young, bubbly, slightly wiseacre friend.

Target is also known for promoting an internal culture of diversity and inclusion and taking stances on certain social or economic-related political issues. They make calculated business decisions that inevitably lead to backlash from customers who share differing opinions. However, the company has devoted fans who readily take up for the company (ex. Figure 1 below) – including a recent instance of a non-Target-staffer posing online as a company customer service rep for several hours and trolling angry customers in a hilarious and viral bit of absurdity (Figure 2 below). 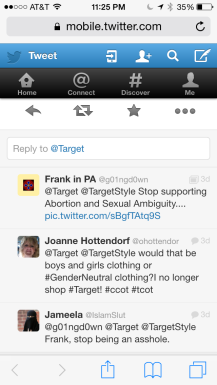 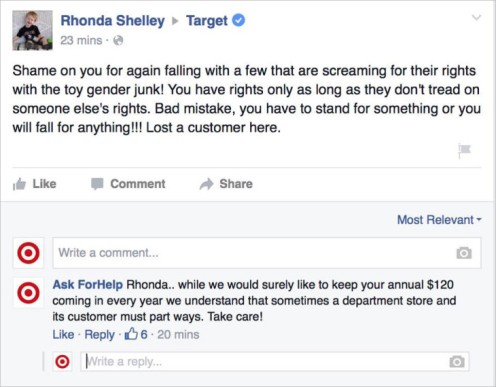 In a telling tale that seems to underscore Target’s personality, the company barely made any noise about the fake customer service employee – as if, even though it may have created a headache or two in the corporate office, that even they appreciated the joke to an extent and that the sublimely cheeky tone of the troll was one they secretly wish they could have in their own toolbox.

Lastly, the company is skewing even younger and more Hispanic in its more recent marketing efforts and it has branched out even further into the social/digital realm by creating spinoff social media sites such as Target Style, Target Deals, Target News, and more, some of which already have garnered hundreds of thousands of followers on their own, and they have worked to develop a synergy with outside sites such as Twitter’s BuzzFeedPartner.

Although there are differing opinions as to the company’s current health, Target is a very savvy brand, and its integrated marketing efforts having pushed through to touch to many customers in what they perceive as positive ways. I believe it could have been that bank of loyalty that ultimately saved the company from suffering a larger, perhaps even fatal, disaster when its fell victim to hackers who breached the company’s data in 2013. The company survived, continues to gain fans through its creative branding, and remains a force in the world of discount retail.