Many differences exist between Classic Marketing (traditional TV/Radio/Print) and Social Media Marketing. In this post, I am going to focus on just two of those differences – scheduling and direction of communication.

SCHEDULING:
We accept as a given that long-term, high quality, brand image campaigns are birthed only after significant investments of time, creative effort, and, usually, cash. Those privy to the inner workings via of a traditional, high-end creative firm via either working at one, knowing somebody who works at one, or watching Don Draper on AMC’s “Mad Men” work at one, have seen the blood, sweat, tears, and in Draper’s case, whiskey, that goes into a big time ad campaign, distributed over traditional media outlets and designed to not only grab attention but have staying power. That staying power is part of the foundation of building loyalty to a brand.

The strategies for developing a traditional marketing plan vary widely, according to the form of advertising used and the type of business. In small businesses, perhaps the entire staff will contribute to planning and execution. Larger companies often have marketing departments dedicated to creating advertising campaigns. If a traditional marketing strategy is devised, then the distribution is likely to include print, broadcasting, direct mail, or some combination of these. The choice depends on the budget and the message to be conveyed. 1

For print and broadcast marketing, the company must arrange to purchase advertising space (print) or time (broadcast). The execution of this step depends on the lead time, or how far in advance the advertising space/time must be purchased. Some print media, such as wide-circulation magazines, have lead times of several weeks. For example, an advertisement in Sports Illustrated magazine must be reserved at least five weeks in advance and longer for premium placement. 2   Broadcast schedules, while usually offering more flexibility than print, can still have premium time slots wait-listed for days or weeks. Of course, premium placement in any traditional medium comes at a higher cost than does less desirable space/time. Once a campaign, or really even just a single ad has been produced and scheduled for traditional media, the prospect of altering the content prior to launch day or afterward can be anywhere on the spectrum from anxiety-filled to impossible. A traditional ad campaign can perhaps be compared to a battleship. It can be viewed with confidence as tough and tested and technically advanced, but also expensive, slow to get out into the open water, and very difficult to change course quickly once it’s underway. That’s just the unalterable DNA, if you will, of a battleship.

On the other hand, advertising campaigns built for distribution via social media channels, while they can still be very expensive creations, especially if professionally stylized video is utilized, they do not have to be. Ads may also be hyper-targeted due to sophisticated data-mining which makes them more cost-efficient. That targeting is also causing the ad to be viewed (or even “experienced” these days) by the exact demographic the advertiser craves, instead of the much more scattershot method of traditional media. Brands using social media ad campaigns intelligently can also have tremendous success with grassroots efforts via “likes,” word-of-mouth-style sharing, and the platinum mine of virality.

One of the most attractive aspects of social media marketing is its dynamic, fluid nature. The creative people and company brass behind ad campaigns have the ability to make last second changes prior to launch because they control the delivery vehicle – it’s their own Facebook page, their own Twitter or Instagram account. They are able to make their own deadlines without having to defer to a magazine publishing schedule or a scheduled television commercial playlist. Even better, they have the capacity to react to instant feedback from the audience once an ad is launched – perhaps one facet of the ad needs to be changed – wording, tone, a visual – and it can happen quickly. I have sat through countless leadership training experiences which have extolled the virtues of being proactive instead of reactive, but in marketing, the ability to be reactive is a very positive thing. Social media is perfect for a company that wants to be able to react quickly to their customers’ feedback and/or real-time situations.

A well-publicized example of real-time social media marketing dynamics is the Oreo cookie campaign in early 2013. The company had already begun a new marketing campaign in anticipation of the upcoming Super Bowl. Come game day, with action already underway, the stadium lost power and the game was delayed – an unprecedented occurrence witnessed by hundreds of millions of viewers. The creative team at Oreo leaped at the opportunity and issued its famous Oreo Blackout Tweet, capitalizing on the breaking news situation. 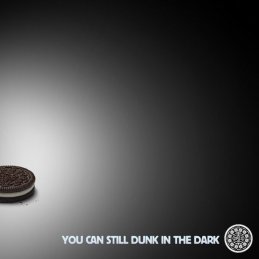 The well-timed response resulted in 525 million earned media impressions for the brand, and wildly expanded its visibility in the social media landscape. With audience attention high, Oreo followed the Blackout Tweet by asking fans to pick their favorite part of an Oreo cookie and make their opinion known via an Instagram post — complete with the hashtag #cookiethis or #cremethis. The promotion drew more than 46,000 submissions within three days. Before the Blackout Tweet, Oreo’s Instagram followers numbered 2,200; afterward it jumped to more than 85,000. 3

The best advice appears to be for an advertiser to utilize a combination of both methods of marketing – old traditional and new social. Social media, to me, has become the more intriguing of the two. It is truly changing the marketing universe. Advertisers both behemoth and minuscule can have a reasonably level playing field to start, and with compelling content, intelligent targeting/scheduling, and good pre-planning, anyone’s ad or campaign has a chance to be very successful.

Whether using traditional media or social media as a means of communication with an audience of potential consumers, a marketer wants to connect with that audience and get a specific message across, be it “buy this product” or “support this cause” or “be aware of this situation.” The directional nature of those two avenues, however, is significantly different.

Traditional media – TV/Radio/Print – is a very one-directional scheme for communication with the audience. It is a centralized, top-down style delivery where the message – usually carefully crafted by a creative unit and vetted by top management (and often even a legal representative) – is broadcast or published to an audience via avenues that by their physical nature do not allow return communication. It’s not impossible – there are always old school phone calls to a company (good luck getting through the phalanx of receptionists and executive assistants) or letters/emails to a company which could easily go unread and directly into a file – electronic, cabinet, or the dreaded “circular” – but it’s usually not an easy or effective way to respond.

Communication via traditional or “classic” marketing channels is broad in scope and the users essentially are satisfied with their feedback being that which is strictly tallied at the cash register.

Social media marketers, on the other hand, crave quick, nay, immediate feedback from their audience. For better or worse, they roll the dice on whether that feedback will be positive or negative, and the results are typically exponential because of the open nature of the responses. The world can see whether or not any given individual approves of the marketer’s message or not. And this marketing tactic – the two-directional conversation with customers – is one being chosen more frequently today, even by more traditional companies, not just edgy, young-demographic-seeking advertisers. As Angela Cook, one of my predecessors in this MMC-5006 adventure states, “social media sees no benefit in silent audiences, and so it gives power and voice to the consumer.”4

Truly, marketers who utilize social media desire to know what their audience wants, and if they are smart, they are prepared to make changes to their product/message based on the return communication and they respond quickly and frequently with those consumers who have engaged in the discussion. This process is becoming “the new normal” for businesses or causes who are most effective at building loyalty and relationships with their customers, and, as we know, loyalty breeds longtime sales success.